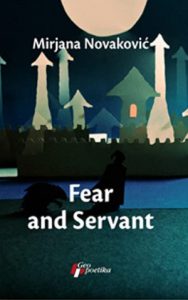 Serbia in the 18th century: battleground of empires. In Belgrade, safe for now behind the fortress walls, a Habsburg princess waits for love. Outside, fear stalks the land. And then the devil comes to town, untrusty servant in tow. Are the dead truly rising from their graves? Is the Last Judgement beginning here in the Balkans? (And can it be stopped in time?) The two royal narrators – one from Austria, one from Hell – join the hunt for the undead, travelling through history, myth and literature, into the dark corners of a land that has given every human language its most infamous word: Vampire.

Mirjana Novaković was born in Belgrade in 1966.

The Serbian original of Fear and Servant was shortlisted for the NIN literary prize and received the Isidora Sekulić Award. A play based on the novel was performed at the 2003 BELEF summer festival in Belgrade. The French translation of the novel was published by GAIA Editions in 2006. To date, the original has gone through seven printings.

Johann’s 501 was also shortlisted for the NIN Award, and received the Lazar Komarčić Prize for Best Science Fiction Novel of the Year.