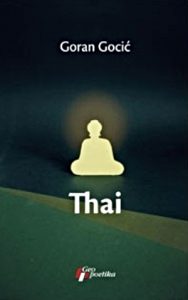 If it were not a novel, this would be a “feasibility study” dealing with the ways and means of a self-aware man who wishes or, rather, seeks to protect a woman. The project is, under the given circumstances, doomed to failure not because it is impossible, but because it is unnecessary. The fragile and gentle woman, with her passive (Buddhist) presence and existence, with her rejection in acceptance, would lead this seemingly macho man to self-decomposition. He goes through a stunningly honest self-analysis only to turn himself into a vulnerable human being. So vulnerable, in fact, that he is the one who seeks St. Christopher’s protection.

…Thai also serves as a lesson given to a complacent Westerner, with the intention of curing his haughty ego by succumbing to the East. However, there are no winners in this process, only losers. And even then – he can be healed only temporarily by the “Empire of Emptiness” – the emptiness being essentially a feminine quality.

Goran Gocic (b. 1962) has a B. A. in English language and literature from the Faculty of Philology, Belgrade and an M. Sc. in Media and Communications from the London School of Economics and Political Science. He has worked as a freelance journalist, editor, translator and filmmaker for thirty-odd media outlets – Borba, Politika, Dnevni Telegraf, Radio Television Serbia (Serbia), the BBC, Channel 4, Sight and Sound (UK) among others. His essays have won several awards. Goran Gocic has authored chapters in sixteen books, including Degraded Capability: The Media and The Kosovo Crisis (2000) coauthored by Harold Pinter, and Želimir Žilnik: Above the Red Dust (2003), both of which have been published in three languages. His film credits include the documentaries Balkan Diaries: Bulgaria (2010) and the awardwinning Bloody Foreigners (2000). He has published the study Andy Warhol and the Strategy of Pop (1997) and Notes from the Underground: The Cinema of Emir Kusturica (2001), selected among the top five film books of the year by The Observer. So far, his works have been translated into ten languages. In 2014, Goran Gocic’s first novel Thai won the NIN Prize, the most prestigious literary award in Serbia and has become a bestseller.