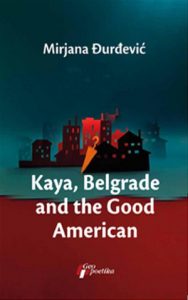 Kaya, Belgrade and the Good American

The novel Kaya, Belgrade and the Good American by Mirjana Đurđević is a vivid picture of a period, ennobled by robust story-telling. The story-teller, who occupies an ambivalent position – one moment an omniscient observer, the next moment an unnamed character in the story – talks ironically and humorously about a carefree world which is not aware of the oncoming cataclysm that will be caused by the outbreak of Nazism in Germany. The novel conjures up the atmosphere of Belgrade before World War II, and the story centers mostly around the small Kalmyk population which settled there together with the Russians who fled in the face of the October Revolution. At its core, there is an auto-ironic portrait of a not-so-popular authoress, who compensates for her want of productivity with a fashionable life in the Yugoslav capital, participating in local scandals and running her own small detective investigation.

Mirjana Đurđević (Belgrade, 1956). Graduated from the Faculty of Engineering and worked for many years as an urban planner. She is a teacher at the Engineering-Geodetics Trade School, and a writer. She has published several books in her profession. Her novels include: Čas anatomije na Građevinskom fakultetu/An Anatomy Class at the Faculty of Engineering/ (2001), Treći sektor ili sama žena u tranziciji/The Third Sector or the Woman Herself in Transition/ (2001, 2006, 2009), Ubistvo u Akademiji nauka/Murder at the Academy of Sciences/ (2002, 2007), Parking svetog Savatija/The Parking Lot of St. Sebastian/ (2003, 2008), Deda Rankove riblje teorije/Grandpa Ranko’s Fish Theories/ (2004), Aždajin osmeh/The Dragon’s Smile/ (2004), Jacuzzi u liftu/The Jacuzzi in the Elevator/ (2005), Prvi, drugi, treći čovek/First, Second, Third Man/ (2006, 2008), Čuvari svetinje/Guardians of the Sublime/ (2007, 2008), Čim preživim ovaj roman/As Soon as I Survive This Novel/ (2008, 2009). For her novel Kaya, Belgrade and the Good American she received the prestigious Meša Selimović Award for the best book in the region in 2010.