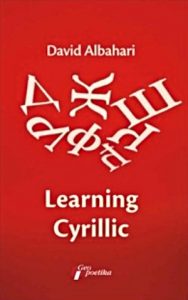 Using the fine strokes of his familiar melancholic narrative, in Learning Cyrillic Albahari offers us an entire palette of finesses in this masterful portrait of identity. Against the background of the immigrant experience, the author presents us cameos which show the multi-faceted relationships of his characters with their surroundings. Here we have the intimate workings of the marital matrix, the gap (or exchange…) between generations, the relationship between a newcomer in the New World with the Native Americans, the struggle between the retention of one’s devotion to birthplace and the need to fit into one’s adopted homeland – the contrasts are stark and thought-provoking. Albahari’s short stories in this volume echo with the contemporary theme of our loss of and subsequent search for identity. Presented with his particular flare for the ironic and subtle, these stories are simply breathtaking.

David Albahari was born in Serbia in 1948 and emigrated to Canada in 1994. He is the author of thirteen novels and eleven collections of short stories. Description of Death, a collection of short stories won the Ivo Andric Award in 1982. His novel Bait won the NIN Award as the best novel published in Serbia in 1996. His books have been translated into twenty languages. Six of his books have been translated into English, including Goetz and Meyer, which won the ALTA award, and Leeches which has been described as “a bold response to Serbia’s bloodstained history.” One of his stories was selected for Best European Fiction 2010, edited by Aleksandar Hemon. David Albahari has translated into Serbian many books by contemporary British, American, Australian and Canadian authors, including stories and novels by S. Bellow, I. B. Singer, T. Pynchon, M. Atwood, V. S. Naipaul and V. Nabokov. He has also translated plays by Sam Shepard, Sarah Kane, Caryl Churchill and Jason Sherman. He was a participant in the International Writing Program in Iowa (1986) and International Writer-in-Residence at the University of Calgary, under the auspices of Markin-Flanagan Distinguished Writers Program (1994-95). He lives in Calgary, Canada, with his wife and their two children.