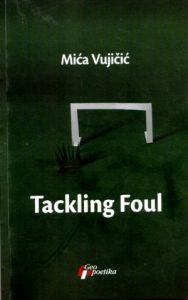 Tackling Foul is a novel about a family history which takes place in the last decade of 20th century war-torn Serbia; its story, compassionate and heartfelt, about eccentrics, romantics and relentless fighters in the battle of life, is written with great charm and elegance, unparalleled in contemporary Serbian novel-writing. The author’s perspective of his characters is twofold: they are depicted in their home and family surrounding, and also in the historical impasse of Milošević’s Serbia. The warm and well-intended irony and humor are in fine balance with the ethical issues of the story. Kind and full of understanding, but not patronizing, with tongue-in cheek humor, the narrator’s voice is a highly original creation of Mića Vujičić. With this novel, the author ranks among the most talented novelists of his generation.

This gentle and funny book makes its way to readers with its poetic repetitiveness and an appropriate metaphor of life – football, as well as with its representation of family life. The home is a place for the forming and losing of identities, for conflicts and their solutions; it is a place where anecdote and narrative, two seemingly opposite poles, intersect, producing a range of narrative varieties.

Mića Vujičić was born in Mokrin in 1979. He is a free-lance journalist for several leading national and regional newspapers. He has published short fiction in various literary magazines. He also writes literary criticism. For the manuscript of the novel Tackling Foul, he won a scholarship from the Borislav Pekić Foundation. He lives in the village of Mokrin.