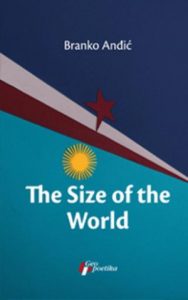 The Size of the World

The Size of the World offers a finely structured story about a world long gone but forever existing in its protagonists. It depicts Anđić’s experience of growing up and coming of age in the former Yugoslavia, from the early 1960s till the late 1980s, presenting an image of a typical Yugoslav childhood of the time, with some notable differences that formed the author’s character and his world-view. In order to come to terms with his father’s death, the author, now as a grown man, travels back into the past in order to recollect all the smells, the sounds and the images which will create a stable and meaningful representation of the one world that imbued him with the need and curiosity for exploration of other worlds. The size of the world for himself, for his own son, and for his father represents an ever shifting notion, whose beauty lies inside those who undertake the journey to cross it. This portrait of the artist as a young and somewhat older man is a true pleasure to read.

Branko Anđić (b. 1952, Belgrade) is a Serbian short-story writer, essayist, novelist, translator and journalist who has been living in Argentina for more than two decades. After graduating from the University of Belgrade Faculty of Philology, and completing his postgraduate studies in Theory of Literature, he worked for the TANJUG news agency, and later, also, as a foreign correspondent in Latin America for numerous European and North American media. Anđić is a co-founder and editor of Pismo literary magazine, as well as a former editor of the Književne novine literary journal. His translations of Latin American authors include the works of Borges, Garcia Marquez, Vargas Llosa, Fuentes, while many others have been published in numerous anthologies. His own literary oeuvre began with collections of short stories, After a Gig (Posle svirke, 1982) and Lioness Licks Her Wounds (Lavica liže rane,1989), followed by Pouring Rain (Kao iz kabla, 2003) and This is a True Story (Ovo je istinita priča, 2007).