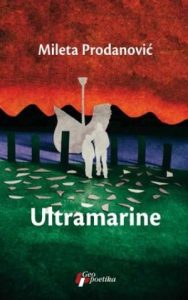 The title of the novel Ultramarine is a highly symbolic and a well chosen one too: it refers to a specific type of blue color, and also it vibrates with associations of the sea, and indirectly to death, since death can be perceived as crossing to the other shore. It is also the favorite color of the narrator’s late father who was a painter. It tells the story of a father-son relationship, of maturation and coming to terms with oneself. It is often said that a picture paints a thousand words, but in the case of Prodanovic’s novel, it is really a tie, or it is more like pictures and words joined together are a worthy, and rewarding, reading experience.

Ultramarine is a novel that can be read as an illustrated autobiographical essay, or as a novel travelogue – this genre fluctuation being one of the greatest qualities of the book which is at the same time bitter and nostalgic, critical and escapist… The reading of Ultramarine requires a specific visual imagination; it is a journey not into the realm of dreams but into the past, into reality and politics.

Mileta Prodanović centers his text on the character of the father, a never-ending and secretive obsession of Serbian culture; it offers an analysis of masculinity and identity, of maturation and political expressiveness. Ultamarine is an ironic and sentimental guide through our time in which its author shows how poetics and politics can be effectively combined.

The artistic career of Mileta Prodanović (1959, Belgrade) is divided between art and literature. He is a well-known painter, writer and novelist who studied architecture and painting at the University of Arts in Belgrade where he teaches today. Since the early 1980s Mileta Prodanović has been publishing essays in the field of visual arts, magazine articles, and also works of fiction. He has won several awards in the field of literature and art, including: the Serbian Academy of Arts & Sciences’ “Ivan Tabaković” Award, the “Lazar Trifunović” Award for Art Criticism, the “Borislav Pekić Fund” Scholarship, the “Sava Šumanović” Award for Visual Arts, the “Vital” Award for Literature, and the City of Belgrade Award for Literature. For his novel Ultramarine (2010), he was awarded “Stevan Pešić” and “Todor Manojlović” Awards. For the best book in 2008 he was awarded a regional award “Bulgarica”.

Prodanović participated in the Iowa University International Writing Program in 2001. So far he has written more than ten novels, among which Dinner at St. Apollonia (Večera kod Svete Apolonije, 1984); Travels across Images and Labels (Putopisi po etiketama i slikama, 1993); The Dog with the Broken Back (Pas prebijene kičme, 1993); Dance, Monster, to My Soft Music (Pleši čudovište na moju nežnu muziku, 1995); A Red Scarf of Pure Silk (Crvena marama sva od svile, 1999); This Could Be Your Lucky Day (Ovo bi mogao biti vaš srećan dan, 2000) which he also adapted and directed for the theater; The Garden in Venice (Vrt u Veneciji, 2002), Elisha in the Land of Saintly Carp (Eliša u zemlji svetih šarana, 2003); The Collection (Kolekcija, 2006) and Arcadia (Arcadia, 2013); four collections of short stories including Agnus Dei (Agnec, 2006) which won the best book award of 2007; four books of essays and a collection of poetry, Miasma (Mijazma,1994). His stories appeared in several anthologies of recent Serbian prose, among others in the selection of The Prince of Fire – An Anthology of Contemporary Serbian Short Stories, University of Pittsburgh Press, 1998. His works have been translated into more than a dozen languages.