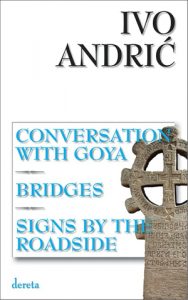 Conversation With Goya. Bridges. Signs By The Roadside

The work which most obviously spans the categories of fact and fiction, history and legend is the Conversation with Goya (1935). Here, the author’s identification with his subject is complete. The ideas attributed to Goya are in fact Andrić’s own reflections on the nature of art, provoked by an affinity with the painter’s work. Had Andrić been interrogated as Ćamil was, he would have had to reply: “I am he”.

The form of this piece, which has been used by other modern writers, brings it closer to a work of art than an essay. Goya’s physical appearence is described briefly with particular attention to his hands, the bridge between the painter’s physical existence and the world of his imagination. The “conversation”, like so many of Andrić’s works, is set in a frame with two dimension: the timelessness of a small French café, and the reference to a circus being set up outside it. The fact that the café is near Bordeaux rather than in Spain suggests the insignifiance of man-madae geographical divisions.

The main idea presented in the essay is that the situation of the artist described as ambiguous and often painful. He is resented as suspect, concealed behind a number of masks. The artist’s destiny “insincerity and contradiction, uncertanity and a constant vain endeavour to bring together things which cannot be joined”.

Signs Along the Road: The collection of these notes entitled “Znakovi pored puta”/ “Signs by the roadside” as well as “Sveske”/”Notebooks”, published after Andrić’s death, can be best described as the writer’s intellectual diaries. As may be imagined of a man who recoiled so consistently from any exposure of his private life and thoughts, Andr