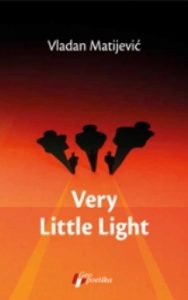 This three-part novel tells the stories of three seemingly very different characters whose crises bring them home with the hope of restoring their weary souls. The reader’s task is to see through their language of, more or less, disturbed minds, which is not easy although highly rewarding. A schizophrenic art historian, an alcoholic, former minister, and a student of philosophy who cannot distinguish reality from dreams, are the unreliable narrators that confront us with their fuzzy worldviews given in a bitter-sweet, harsh and humorous tone. Using some of the more interesting techniques of the writer’s craft, Matijević’s masterful narrative structure, combined with modern sensibility, restores our faith in the power of art.

“We can conclude that this novel by Vladan Matijević represents an excellently conceived and executed work…The pessimism of the novel is convincingly depicted by the author, prompting the readers to undertake an active approach to analysing and determining their position in relation to the narrative. I think that it is precisely this provoking quality which is the strongest quality of the novel.”

Vladan Matijević (Čačak, Serbia, 1962), a novelist, poet, playwright, essayist, entered the Serbian literary scene in the last decade of the 20th century, with his first book of poetry Not Disturbing the Havoc (Ne remeteći rasulo, 1991). Three years later, his first novel, Out of Control (Van kontrole) was published, one of his nine books of prose for which he received all major Serbian literary awards: the Ivo Andrić Award in 2000, for the book of short stories Quite Dead (Prilično mrtvi); the NIN Award for his novel Writer from Afar (Pisac iz daleka); as well as Awards “Meša Selimović”, “Isidora Sekulić”, and “Borisav Staković” for his novel Very Little Light (Vrlo malo svetlosti) in 2010. He also received “Kočićevo pero” and “Kočićeva knjiga”, awards for a book of essays Memoirs, Amnesias (Memoari, amnezije). More than fifty critical essays and reviews analyze his work, while his life and literature are recorded in two documentary films. He works at the Nadežda Petrović Art Gallery in Čačak.