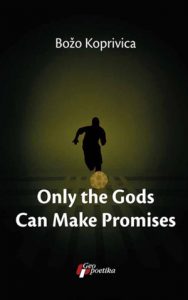 Only the Gods Can Make Promises

This is a compilation of footnotes about the street tamers of rag-balls who grew up to be the masters of fateful shots in unforgettable football matches. Koprivica does it on paper just like Di Steffano does it on the pitch, in an all-encompassing manner. He writes with his brain, his blood and his heart… Koprivica is marked by his love for the game as a true, devoted soccer fan, whose memory is that of a wise man, whose understanding of things belongs to a true philosopher, and whose words are those of a bard.

Božo Koprivica (Nikšić, 1950), graduated from the Faculty of Philology in Belgrade where he studied world literature. He is the author of the books: Volej i sluh (Volley and Music, 1992), Vreme reči, Razgovori s Borislavom Pekićem (The Time of Words: Conversations with Borislav Pekić, 1993), Kiš, Borhes, Maradona (Kiš, Borges, Maradona, 1996), Dribling (Dribbling, 2006), Samo bogovi mogu obećati (Only the Gods Can Make Promises, 2010, revised edition 2014). He was the editor of a special edition of Ars magazine dedicated to Danilo Kiš (published by the Otvoreni kulturni forum, Cetinje, 2005 and 2009). Koprivica worked as a freelance dramaturge for various theater houses such as Jugoslovensko dramsko pozorište, Bitef Theater, Zvezdara Theater in Belgrade, Royal Theater “Zetski dom”, National Theater of Montenegro and “City Theater” festival in Budva. He made a feature-length documentary film with Emir Kusturica, Seven Days in a Life of a Bird for French television. He has two daughters, Ivana and Jovana. Božo Koprivica lives in Belgrade and is a Partizan F. C. fan.