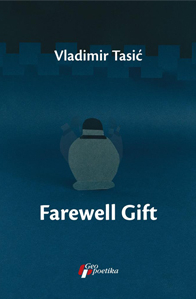 This novel offers us the gift of bitter-sweet memories of coming of age in the shrinking country that once was Yugoslavia. The protagonist’s painful saying good-bye to his missing brother, to his hometown and to all the things which formed his identity in never-erasable past time represents the inevitable preparation for his move to his new home on a different continent. Vladimir Tasić’s masterfully woven story takes the reader on a journey which will eventually end with a peaceful coming to terms with oneself. The cycles of love and loss that build the package of each and every life find an exquisite voice in this masterfully written prose.

Vladimir Tasić (Novi Sad, 1965), a mathematician by vocation (Ph.D. in Mathematics, the University of Manitoba, Canada, 1992), entered the Serbian literary scene with two volumes of short stories, Pseudologija Fantastika (1995) and Radost brodolomnika (translated into English as Herbarium of Souls in 1998). Tasić’s stories have appeared in many literary magazines and anthologies in Serbia. His novel, Oproštajni dar (Farewell Gift, 2001) was voted Book of the Year by the panel of Radio Belgrade 2.The French translation of the novel was published in 2004 in Montreal by Les Allusifs. Tasić’s second novel, Kiša i hartije (Rain and Paper, 2004) received the prestigious NIN literary Award as well as ‘Vital’ Award for the best novel of the year 2004. His latest novel, Stakleni zid (The Glass Wall, 2008) which received excellent reviews, was translated into French. Tasić also published two books of essays Njuškači jabuka (Apple Sniffers, 2004) and Udaranje televizora (Slapping the TV-set, 2008). His work has been translated into German, French, Slovakian, Slovenian, Macedonian and English.

Tasić’s monograph, Mathematics and the Roots of Postmodern Thought was published by Oxford University Press in 2001 and has been translated into Spanish, Serbian and Chinese.