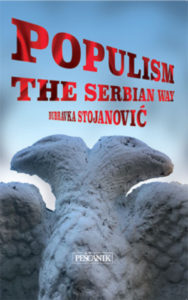 Finally, one thing in which the Balkans have had an advantage over Europe! Populism. Ever since that word entered general circulation, I have been getting ready to proclaim Serbia, and perhaps the entire Balkans, the vanguard of populism. To show that even we excel in something, that even we can explain to someone what’s waiting for them, what you – latecomers – have to expect, and how you might proceed!

The beginning of populism in Serbia dates from the early 1870s, from the populist socialism of Svetozar Marković and the radicalism of Nikola Pašić. After this, such regimes reproduced themselves, with very short intervals, in the course of the 20th century, through socialism, Milošević, all the way to Aleksandar Vučić. That is what gives me that superiority I mentioned at the beginning, because I have that know-how which you are just beginning to acquire.

What are the conclusions? Populism is not a codified ideology, it can be right-wing or left-wing, but its key characteristic is collectivist emotion which sucks in every individual, which crushes every pluralism. A populist movement always speaks in the name of an entire people, and the possibility that you can remain outside and think differently is excluded. It is a deception – it originates from economic and social embitterment as a movement against the establishment, but it will, in the end, additionally impoverish the population and substantially enrich the élite. As identity politics, it is a monistic and essentialist call to be, as the Brexiteers would say, one’s own man in one’s own country. How familiar that sounds to us!