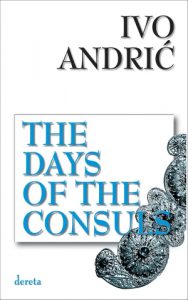 The Days Of The Consuls

Ivo Andrić (1892–1975) is a major twentieth-century European writer, winner of the Nobel Prize for Literature in 1961.

Andrić’s sweeping novel spans the seven years 1807–1814, when French and Austrian consuls served alongside the Turkish Viziers in the remote Bosnian town of Travnik, distant outpost of the Ottoman Empire.

Divided as the community is, Muslims, Catholic and Orthodox Christians, Jews and Gypsies all unite in a common contempt for their visitors. Isolated in a claustrophobic atmosphere of suspicion and mutual distrust, the consuls and Viziers vie with each other, following the fluctuations of their respective foreign policies. When international politics permit however, they console each other as best they can in this harsh and hostile land.

Andrić uses his native Bosnia as a microcosm of human society, stressing its potential for national, cultural and religious misundersta­nding and conflict, and identifying the barriers of all kinds that hinder communication between individuals. Written against the, background of violence released in these mixed communities during the Second World War, the novel now has renewed and poignant relevance.