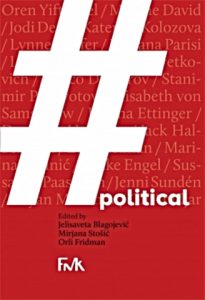 The collection of essays #political presents our efforts to bring together the writings of some of the distinguished scholars who were part of the Faculty of Media and Communications’ international academic network in the last decade. Combining rigorous scholarly assessment of the #political, the editors aimed to establish a new and innovative platform to critically rethink the problem of the normative, highly systematized, and normalized notion of political subjectivities that determine the existing imaginaries for social change, as well as to re-negotiate the new political imagination and reshape the definition and scope of the ‘political’. Furthermore, we aspired to re-articulate the concepts of gender, sexuality, race, peace and class, and finally to analyse the impact and potentialities of politics of unlearning/undoing on systemic stability, aggregates of knowledge, institutions, discourses of sameness, and human exceptionalism. This collection consists of three thematic blocks devoted to the theoretical rethinking of the relations between the notion of the political and the politics of resistance, critical political studies, politics of affects and alike. In that view, the thematic blocks are titled accordingly: #resistancepolitical, #affectivepolitical and #criticalpolitical. As a whole, the collection aims to give prominent samples of current interdisciplinary research in the field of critical political studies.